A Golden Age for Science in Entertainment
Prof. Dr. David A. Kirby 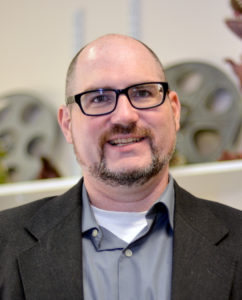 Prof. Dr. David A. Kirby was an evolutionary geneticist whose work appeared in the Proceedings of the National Academy of Scien­ces before leaving bench science to become Senior Lecturer in Science Communication Studies at the University of Manchester. Here he was promoted to full Professor in 2018. His experiences as a member of the scientific community have informed his internationally recognized studies into the interac­tions between science, media, and cultural meanings. Several of his publications address the relationship between cinema, genet­ics and biotechnology including essays in New Literary History, Literature and Medicine, and Science Fiction Studies.

He has also studied the production of forensic television dramas to examine science’s function in storytelling with an essay in Stu­dies in the History and Philosophy of Science. He has explor­ed the collaboration between scientists and the entertain­ment in­dus­try and has publications in Social Studies of Science and Public Understanding of Science on this topic. His book Lab Coats in Hollywood: Science, Scientists and Cinema demon­strates scientists’ impact on the culturally powerful medium of cinema and how these texts have subsequently affected real world science and technology. Since its release, the book has received positive reviews in over 50 media outlets and scholarly journals including Nature, Science, Film Comment, Times Liter­ary Supplement, Times Higher Education, and BBC Focus Ma­ga­zine. The book was named one of Physics World magazine’s top 10 best popular-physics books of 2011.

He received an Investigator Award from the Wellcome Trust to analyse the interactions among the biosciences, religion and entertainment media. He is currently writing a book titled Inde­cent Science: Religion, Science and Movie Censorship, which will explore how movies served as a battleground over science’s role in influencing morality.

Academy Award winning films such as The Martian and The Theory of Everything and television ratings titans like The Big Bang Theory and the Emmy award winning Breaking Bad have proven that science–based entertainment products can be both critically acclaimed and financially successful. It is not just blockbuster movies and hit TV shows that have embraced science. Best selling computer games like The Last of Us and Portal demonstrate that there is a substantial audience for science infused popular culture. In fact, a content analysis of computer games over the last five years showed that most video game narratives (55%) included one or more scientist characters. They also determined that the majority of the scientists in these games were primary rather than minor characters.

The scientific community consistently expresses anxiety about representations of science in entertainment media because they believe that depictions of science and scientists are uniformly negative. From scientists perspective it’s not really difficult to find negative images of science in popular culture. Most scientists when they here the phrase “movie scientist” they probably think about this scene from the 1931 film Frankenstein where Dr. Frankentsein hysterically shouts “It’s Alive! It’s Alive!”(see Figure 1). In fact, it is not difficult to find dozens of examples of the stereotypical movie scientist that we know of as the mad scientist (See Figure 2). You can see many examples including Rotwang from Metropolis, Bela Lugosi and Boris Karloff characters and Doc Brown from Back to the Future. These show a smorgasbord of mad scientists who often have the same appearance of an older white man with fuzzy “Einstein” hair or bald head, bushy beard, thick glasses and a lab coat. But, what most people ignore when they discuss movie scientists, is that all of these movies were made before 1990 and most of them were even made before 1960.
Academic research examining scientist characters in entertainment of the last 10-20 years shows a completely different picture. The portrayal of scientists in contemporary movies, on TV and in computer games has become far more complex and far more positive than these previous stereotypes. The mad scientist is now essentially a relic of the past. The last twenty years has seen a dramatic shift in the depictions of scientists in entertainment from being odd and evil to predominantly positive. Movie scientists in contemporary cinema have gone from being the “Villain” to now being the “Hero” (See Figure 3). It’s not just movies that have seen this shift from villain to hero. Research into the portrayal of scientists in TV shows and in computer games finds that scientists are generally shown as virtuous people and that they are the least likely character type to be depicted as “bad.”

Another change to depictions of scientists has been to the stereotype of the “nerd.” The character first emerged in the 1980s and was predominantly a negative stereotype with a high disdain shown for nerds. But in the last 10 years there has been a substantial increase in nerds on television. Of course, the hit television show The Big Bang Theory features several characters that fit the nerd stereotype including the prototypical nerd Sheldon. But the increase in prominence of the nerd in popular culture has been accompanied by a parallel shift from narratives showing disdain for nerds to narratives that playfully mock the character instead or nerds are shown as hipsters as is the case for characters like Abby Sciuto on NCIS and Cosima from Orphan Black (See Figure 4). There are also now what we can call “suave nerds” like the new Sherlock Homes on Sherlock as played by Benedict Cumberbatch.

Modern scientist characters also exhibit a moral complexity not found in previous portrayals even in those scientists who are villains. The morally ambiguous chemist Walter White in the television show Breaking Bad perhaps best exemplifies the new style non-traditional scientist villain. Although circumstantial economic pressures motivated his decision to utilize science for criminal purposes, his hubris was what turned him into a scientific villain (See Figure 5). In recent entertainment media there has also been a shift away from depictions of scientific knowledge as inherently dangerous towards a portrayal of science as being dangerous only when it is unregulated and untethered to ethical constraints. Fictional portrayals of science have moved from being a “mysterious and dangerous” activity to being one that is “knowable and controllable.”

But how did we arrive at this golden age for science in entertainment? Why is there more science in entertainment and why is this science portrayed more positively? The easiest answer is that media producers became willing to incorporate more science for purely commercial reasons. Substantial box office takes for films such as Jurassic Park and Twister in the 1990s alongside massive ratings for TV shows such as CSI and House in the early 2000s and massive sales for computer games like Bioshock and Mass Effect showed media producers that there was a substantial audience for science-based products. Successes with the Academy Awards, Emmy Awards and video game awards in the past ten years have also convinced entertainment producers that science can add prestige to an entertainment product. We also have the rise of celebrity scientists such as Neil deGrasse Tyson and Brian Cox, which has convinced entertainment producers that science is no longer a topic with limited appeal to geeks; science has become fashionable.

One of the primary reasons that entertainment producers have gravitated towards science is that contemporary entertainment now emphasizes realism across media and across genres. This emphasis on realism in entertainment can be attributed to a number of factors:
• the rise of the blockbuster “spectacle” film in the 1990s including the development of sophisticated special effects technologies such as CGI,
• the rise of reality television,
• the success of the gritty realism in Peter Jackson’s Lord of the Rings and Christopher Nolan’s Batman films,
• the realist orientations of critically lauded “quality” television dramas like Homicide: Life on the Streets and Game of Thrones
• and the fact that computer game designers want the realism of their stories to match the realism of their increasingly powerful visual graphics.

This growing desire for realism has led filmmakers, television producers and computer game designers to increasingly look to science to help them ground their texts in a realist framework. This is because, historically, there has been a long-standing relationship between science and conceptions of realism. Science has been the Western world’s accepted mode of determining “truth” since the Age of Enlightenment. Or as historian Steve Shapin recently said “Science is modernity’s reality-defining enterprise.”

The relationship between science and realism has led to an increase in the number of scientists brought on board to act as consultants for entertainment productions (See Figure 6). In fact, it would be surprising today to have an American film, TV shows or computer game containing substantial scientific content that did not involve a science consultant. Many high profile scientific organizations –most prominently the US National Academy of Sciences’ Science and Entertainment Exchange- have developed initiatives to connect entertainment professionals with scientists. The success of these initiatives helps explain why there is so much more science in entertainment and why popular images of science have changed so dramatically over the last ten years. It is much more difficult for entertainment professionals to stick with old, worn-out negative stereotypes like the mad scientist when they are asking real-life scientists for assistance.

In general, film, TV and computer game producers are incorporating more science because audiences have become more sophisticated in the last ten years. Audiences are demanding more complicated entertainment products and that includes scientific content. Science has been shown to be beneficial both for the entertainment industry and for the scientific community. Science helps entertainment producers create texts that are more dramatic, interesting and entertaining. But it is also the case that the stories told about science in entertainment can convey the excitement of scientific research and communicate a sense of awe about the natural world and our ability to understand it. I believe that is a good thing.