How the „Weissman Score“ became a crucial part of the TV series „Silicon Valley“
Interview with Prof. Dr. Tsachy Weissman

Research focuses on Information Theory and Communications, Statistical Signal Processing, the interplay between them, and their applications. Inventor of several patents and involved in a number of companies as researcher or member of the technical board.

Honors include an NSF CAREER award, several best paper awards, Horev fellowship for Leaders in Science and Tech­nology, Henry Taub prize for excellence in research, incumbent of the STMicroelectronics Chair in the School of Engineering, and IEEE fellow. On the editorial boards of the IEEE Trans­actions on Information Theory and Foundations and Trends in Communications and Information Theory. 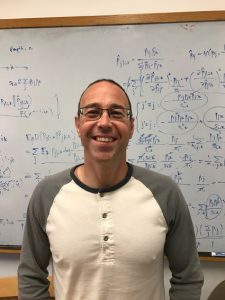 M: How did you get involved with the sitcom „Silicon Valley“?
TW: My initial contact with the show was by Jonathan Dotan, „Silicon Valley’s“ Tech Adviser, who was responsible for the authenticity of the whole show, not just it’s technical side. When Jonathan contacted me they already had a rough idea what they were looking for: They wanted it to be something “esoteric” from their view, something the lay public has no idea nor would care about. They were looking for something that was as uninspiring as it gets. After some research they concluded that Compression would fit the bill and they contacted me because they found out that Information theory lies behind compression and also digital communication. They sent me an email and although I usually do not answer emails from people I do not know, this time somehow I found and answered it.

Had you previous contact with show business and were you a fan of TV series?
TW: No to both. It was the first time I have been contacted. And actually no, I did not watch any TV show. But I got this email and all of a sudden it seemed interesting. Jonathan identified himself as being from HBO and so I knew it was serious. He wrote about the premises of the show, a start up in Silicon Valley doing something quite “esoteric” in the field of data processing. We exchanged ideas and in the end they decided that compression would be the most promising.

How did it actually work?
TW: They wanted someone to advise them on technical and mathematical issues and to bring in ideas. Also from the beginning they wanted to make sure that these ideas would be scientifically and mathematically sound.
More than in the past these days people care about details and accuracy, especially the geeky experts. I think that BBT sparked the culture of screenshots and geek discussion about soundness and correctness. So they wanted basically to get the technical details right.
Most of the actual work on the script and on set was done by my graduate student under my supervision. While doing this work V came up with the Weissman Score. They wanted something that was very geeky and esoteric but at the same time they needed drama and something which was quantifiable in the context of compression. The Weissman Score is a formula for evaluating the performance of a compression scheme. It was created for the benefit of a competitive and sports like moment in the story, but has in the meantime been adopted by some scientists. Projects were given to students in courses on compression where performance was evaluated according to the Weissman Score. So technically speaking V came up with ideas that could be potentially explored scientifically, while working on the show, like the Weissman Score and also the Middle-out-algorithm. Not only was science helping in the show, but out of the show itself a bit of new science emerged.
Another significant thing for the scientific/academic dimension that came out of the show was the founding of the Stanford Compression Forum. I do give the credit for much of the gestation of the Centre to the work on the show and particularly the interaction with Dotan.
Dotan also felt there was a divide in culture and terms between scientists and practitioners in the information/compression field. So D helped connect all of us and we ended up with an event at Stanford, a very interesting event, the first one, including Academia, the high-tech industry, and the Entertainment industry. It doesn’t happen every day. Since then there was one more meeting, now it happens every year.

Was it a culture clash for you?
TW: My work was mostly pretty isolated from the show, but the interaction that I did have with the show and especially with Jonathan Dotan was very enjoyable.

And what do you think about accuracy and the measure for it in entertainment?
TW: I think there is something very compelling, when they get the details right. Both the cultural and the technical. My involvement itself was motivated by their wish for technical accuracy. Initially I felt that it was an opportunity to put in the spotlight some of the esoteric things I do and then when I saw how genuinely interested, engaged and open they were to incorporating our input of course that boosted our motivation. The fact that it was technically realistic was all the motivation.
On the other hand there was the influence of the show on me. Because they wanted to know about application, my involvement in the show whet my appetite regarding the application, the more practical sides of compression, such as genomic data compression. Also, since the work on the show I’ve become more aware of TV shows

Could you imagine continuing to work for TV Shows?
TW: Next time some show wants my involvement, I will be open to hearing them out. I was impressed how generally interested the makers of „Silicon Valley“ were in all the technical details and the extent to which we were able to influence the show. Essentially everything V pitched to them they took with both hands. And we were able to popularize some things, parts of geek culture like Lena (Playboy model) or Huffman coding (compression scheme). That attracted students who used to work on more peripheral areas of compression and now became interested in the core problems, the theoretical field. In any case, if I were to think seriously about outreach this is an effective channel.

Any cookies that may not be particularly necessary for the website to function and is used specifically to collect user personal data via analytics, ads, other embedded contents are termed as non-necessary cookies. It is mandatory to procure user consent prior to running these cookies on your website.